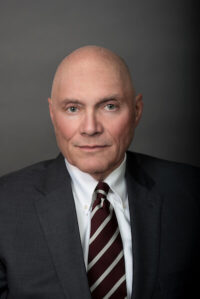 Born in Detroit, Michigan, Tom Pitts moved with his family to the Akron, Ohio area in 1952. Tom graduated from Cuyahoga Falls High School in 1964. After military service, Tom returned to the University of Akron. He received his Bachelor of Arts in 1976, majoring in Philosophy and Communications/Mass Media Studies. He immediately entered the University of Akron School of Law where he obtained his Juris Doctor degree in 1979. He has since been engaged in the private practice of law. For over 30 years he has limited his practice to the representation of injured and disabled workers and their families in Ohio Workers’ Compensation and Social Security Disability claims.

In service to the legal community, Tom is a past-President of the Summit County Association for Justice. He is a member of the Ohio Association for Justice and was selected as Chairperson of the Association’s Workers’ Compensation Committee. He is also a member of the Workers’ Compensation Committee of the Ohio State Bar Association. Tom is a former Trustee of the Akron Bar Association and has participated in many of the Akron Bar’s Committees. He is presently active in the Disability Law Section and Lawyers’ Assistance Committee. In 2010 Tom received the Akron Bar Association Bradford M. “Buck” Gearinger Professionalism Award, granted to a single attorney each year in recognition of “exceptional dedication to the standards of the profession and to recognize one who has demonstrated integrity and humanitarian concern within the community.”

In 2008, Tom was appointed by Governor Ted Strickland to the Ohio Bureau of Workers’ Compensation Board of Directors. During his three year term, Tom represented the interests of all Ohio employees.

Tom is a member of the IBH Addiction Recovery Center (Akron, Ohio) Board of Trustees and serves on the Board’s Governance Committee.  He frequently speaks at Continuing Legal Education programs on the subjects of Workers’ Compensation law and assistance to persons impaired by alcoholism and drug addiction.

How can we help?

Meet Our Team
About Our Firm
Request a Free Consultation

Call today to discuss how we help you obtain the benefits you deserve.

Contact Us
Page load link
This site uses cookies. By continuing to browse the site, you are agreeing to our use of cookies. OK
Go to Top