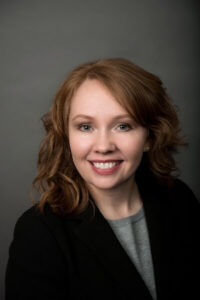 The focus of Sarah’s practice is Ohio’s workers’ compensation law.  In her 15 years of practice, she has represented thousands of Ohio’s injured workers, guiding them through the claims process and pursuing their interests before the Industrial Commission of Ohio.  She is an active member of the Ohio Association for Justice’s Workers’ Compensation Section, and she previously held the position of Akron/Canton Regional Representative for that organization.  She is also a member of the Akron Bar Association and the Ohio State Bar Association.

In addition to her legal work, Sarah enjoys volunteering her time with the Girl Scouts of Northeast Ohio.  Since 2012 Sarah has spent much of her time as a Girl Scout troop leader, dedicated to the development of the confidence and leadership skills of the young women in her community.

How can we help?

Meet Our Team
About Our Firm
Request a Free Consultation

Call today to discuss how we help you obtain the benefits you deserve.

Contact Us
Page load link
This site uses cookies. By continuing to browse the site, you are agreeing to our use of cookies. OK
Go to Top